Much Ado About Bitcoin

In an effort to make our digital world more secure, an increasing number of transactions are being done digitally.   This may be by converting contracts into encoded digital information or by encrypting financial transactions by the use of a cryptocurrency such as Bitcoin.

The digital age has revolutionised the world of commerce. Technology has facilitated the ability to do business instantly, and from anywhere in the world. This is a concept that would have been unthinkable just a few generations ago; after all, who could have conceived that a series of ones and zeroes would  be so revolutionary?  The legal world – traditionally methodical, slow-moving and precise, is at odds with this new, instantaneous method of communication.

There has been an unprecedented transformation in our towns and cities as a result of the digital revolution.  Fleet-footed, digital mega-giants such as Amazon are challenging the received knowledge of conventional business. Many high street stalwarts are contracting or even completely collapsing at an unprecedented rate. This sets a number of challenges, and causes many of us to wonder about the future of conventional business transactions.

The invention of Bitcoin – a traceless cryptocurrency – is often attributed to the mysterious ‘Satoshi Nakamoto’. It was created in 2009 in an apparent attempt to make peer-to-peer transactions more secure. Bitcoin avoids the need for third-party mediation (in the form of the hitherto trustworthy bank). Up to this point, banks were regarded as the safest way of conducting a financial transaction. However, the fallout after the banking crisis in 2008 after the collapse of Lehmann Brothers led many to reflect upon the security of this transactional method. Indeed, history is littered with ‘bubbles’, ‘crashes’, ‘currency debasements’ and – more latterly – ‘identity theft’. These are all attributable (at least in part) to the world’s reliance on banking systems.

There has been increasing interest in Bitcoin since its creation just after the ‘property bubble’ spectacularly burst in 2008. Bitcoin provides the opportunity for a safe, untraceable, unmediated transaction – all very attractive benefits to conventional business. Conversely however, because of its intangible nature, Bitcoin is similarly attractive to money launderers and drug traffickers. Clearly  a robust definition of ‘secure’ is essential. 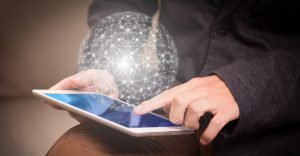 Secure digital encryption technology can also be used in the formation of so-called Smart Contracts. These contracts are often written entirely in computer code. Being digital in nature, the interface with the real world can be problematic.  For example problems arise  when there is a statutory requirement for a signature, or simply when ordinary people need to be able to refer to the contract terms.

Sir Geoffrey Vos, our forward thinking chancellor of the High Court has expressed concern that legal uncertainty in the UK is in danger of ‘holding back the exploitation of crypto assets and smart contracts.’.

Clearly there are issues associated with all of this seemingly relentless digitisation.

The legal world – methodical and precise, might sometimes find itself at odds with this new, instantaneous method of communication.